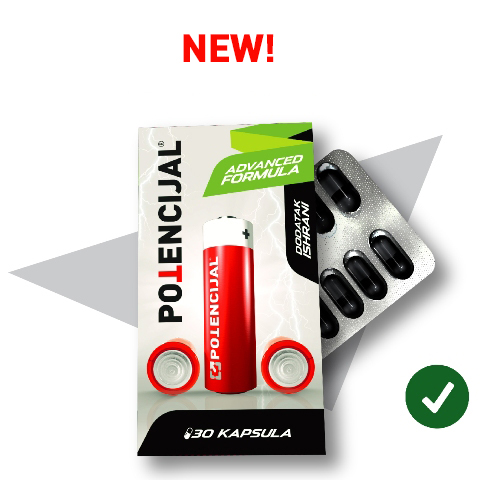 POTENCIJAL Advanced Formula is an additionally enhanced formula of the well-known POTENCIJAL. Still safe to health but now with improved ingredients and powerful effect. It is used in the same way as POTENCIJAL. POTENCIJAL Advanced Formula in a capsule is used by taking one capsule in the morning and one in the evening, and can also be used by taking one to two capsules additionally before intercourse. The head of the team of experts is Dr Gordan Popovic, our renowned urologist and sexologist who has been running his urology and sexology office "POTENCIJAL" successfully for 20 years, and after which the most thriving potency supplement in our area would be named. The task that Dr Popovic set before his team of experts was to create a potency supplement which would be suitable for wide use, i.e. which could be bought legally without doctor's prescription, safe to health and with a long-term positive effect on potency. Out of 27 different formulations, tested within several years, the one which gave the best and most reliable results was chosen. This most successful formula was named after Dr Popovic's office - POTENCIJAL.

POTENCIJAL Advanced Formula represents a 25-year experience with men in the practice of Dr Gordan Popovic and gives maximum results after one to three months of correct therapy dosage.

With this combined usage you will acquire a strong immediate effect, but also a long lasting improvement which remains long after you stop using POTENCIJAL supplements.

The combined use enables maximum effect

Ask for it in pharmacies or order here.